Three political party leaders walk into a kitchen. They want to show their prowess as chefs to encourage more men to cook. David “Call me Dave” Cameron and Nick “Who” Clegg produced “something with pasta” while Ed “I’m the labour leader” Miliband made a tuna melt. These imaginative men who lead (or oppose the leadership) of our fair nation can actually cook enough to sustain themselves. Honestly isn’t that enough? I dare say that they’d even manage to boil an egg if faced with a national emergency.

Nigella thinks so anyway. Apparently cooking and baking are feminist pastimes. Who knew? Yes girls, slaving away in the kitchen is just the same as asserting your equal rights as a productive member of society. Menz don’t need to be able to cook obviously because the feminist thing to do is to produce a slap up mean for your man to eat as soon as he returns from his busy day at the office. Her husband, Charles Saatchi, is no slouch in the kitchen though. He can make his own toast and his own Weetabix. What a guy.

My view, setting sarcasm aside for a moment, is that every single person should be equipped with basic skills for living. You should be able to cook, sew a button on, repair a tear, balance your chequebook (you remember those?), produce a CV, clean up after yourself, do your laundry and ironing and, most importantly, solve your own problems. Having a “cook off” with party leaders might be nice spin but it just highlights the fact that they are a bunch of dicks.

A recipe for all members of the church of the Flying Spaghetti Monster and for all atheists. Who says we can’t cooperate with church people when we have to?

Filed under Atheist, Recipe for disaster

I completely forgot about pancake day.

Which leads me to my question for today:

1. Pre-heat the oven to 180C/350F/Gas 4.
2. Mix all the ingredients except the dried fruit together. You can do this in a food processor or by hand in a basin.
3. When they’re all thoroughly mixed, add the dried fruit. Spoon the mixture into a 1kg/2lb non-stick loaf tin, spread it out evenly and bake it for one and a half hours. The loaf is done when a skewer pushed into its middle comes out clean.
4. Cool on a wire rack, then slice before serving.

This is an ideal recipe when you’ve bought too many bananas and they’ve started to go a bit brown.  Enjoy.

Filed under Reasons to be cheerful, Recipe for disaster 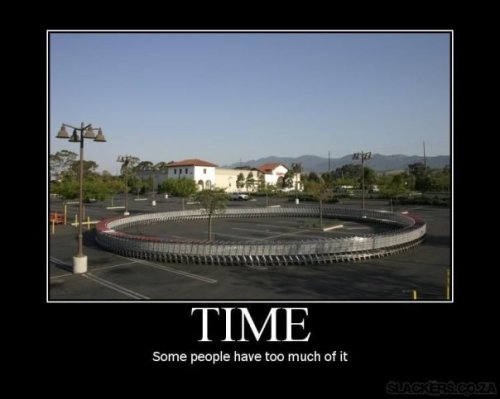 This credit crunch malarkey is just creating a whole pestle of work for me.  If anyone can share some time or maybe some recipes (I watched that nice Jamie Oliver chappy yesterday) then I’d be most grateful.  I know that some people have time to spare.  My time is precious which is clearly why I’m spending it on my much neglected blog.

H. Jackson Brown, Jr.
Don’t say you don’t have enough time. You have exactly the same number of hours per day that were given to Helen Keller, Pasteur, Michaelangelo, Mother Teresea, Leonardo da Vinci, Thomas Jefferson, and Albert Einstein.

In other news I’ve got a new sledgehammer and I’m not afraid to use it.  As a consequence of these two facts I have one fewer wall surrounding le château de grenouille and a pile of rubble in the former fish pond.  I’ve been remodelling dontchaknow.  What destructive\constructive tasks have engaged you recently?

Now, about those recipes… Pass it on.

Filed under le château de grenouille, Reasons to be cheerful, Recipe for disaster

I’ve been playing with some recipes on Vegbox recently. I’ve discovered many delicious things to eat with some very simple ingredients.  Yesterday I tried the Spring Pasta figuring that it would be both filling and healthy.

Be warned though for these ingredients lurk, hidden innocuously, waiting to pounce.

Of course I had to try it and coincidentally I happened to have some double cream and stilton in my fridge…after I went to the shops to buy them.  I cooked the pasta and veg and nibbled a few raw ingredients and when it was draining in the colander I carefully followed instruction number 6.

Drain the pasta and veggies in a colander. Meanwhile, use the hot pan to warm through the cream and melt the cheese. Season with salt and pepper to taste

Double cream and stilton is flipping delicious as a cream sauce.  It’s seriously lovely.  I’m going to use it for other recipes and damn the arteries.

It’s too sweet, too sticky and it makes me feel sick if I eat more than a tiny bit.

It is also poisonous to animals.

You can keep your Easter Eggs, I don’t want them.

Please note that this is not a strange attempt at reverse psychology to get you to send me hoards of chocolate.  I really don’t like the stuff.

Filed under Bad things happen, Reasons to be cheerful, Recipe for disaster

You can have two cakes but if you eat one you’ll only have one left.  So you can eat one cake and have another but but it won’t be the same cake.

If you tell me that I can’t have my cake and eat it I will point out your error and insist that you purchase or make an eccles cake for me.

Make your own Eccles Cakes

Filed under Pedantic, Recipe for disaster

Deb passed me a recipe that I’m planning on trying out at the weekend.

Her husband is Norwegian and apparently so is the recipe.  I’m reliably informed that you can put different goodies in the middle and roll them up like a crepe to eat. i.e. butter, cinnamon and sugar….Have fun!

I’m not 100% sure what a crepe is but I’ll give it a go anyway.  It is actually remarkably similar to a type of Russian pancake that I’ve made before.  The difference being that raw, grated potatoes are used rather than cooked and mashed ones.

DIRECTIONS:
Peel potatoes and place them in a large pot with a large amount of water.  Bring water to a boil, and let the potatoes boil until soft. Drain and mash well.

Mix flour into the mashed potatoes and roll the mixture into balls about the size of tennis balls, or smaller depending on preference.  Keep balls of dough on plate in the refrigerator.

Taking one ball out of the refrigerator at a time, roll dough balls out on a floured board.  To keep the dough from sticking while rolling it out, it helps to have a rolling pin with a cotton rolling pin cover.

Fry the lefsa in a grill or in an iron skillet at very high heat.  If lefsa brown too much, turn the heat down. After cooking each piece of lefsa place on a dishtowel.  Fold towel over lefsa to keep warm.  Stack lefsa on top of each other and keep covered to keep from drying out.

Toad in the Hole

Toad in the hole is simple. Cook some sausages in a dish (we use vegetarian Quorn sausages but you don’t have to.  two sausages per person is about right), mix up some batter and pour it over the sausages when they’re cooked and sliced (slice length ways in half).  Bung it in the oven for about half an hour. Serve with veggies and gravy.  It’s always best if you have a helper.  You can also drink some cheap plonk while you’re waiting for it to cook.

Whisk it all up together. It’s better if you mix the marg, eggs and dry ingredients first and add the milk slowly but I tend to must use the hand blender for speed.

The Magnificent Frog
Create a free website or blog at WordPress.com.